I will admit, buying a car is like looking for a lady. I have been eyeing up cars since we got here, throwing out double-takes on lots of rears as they pass. “What model was that?” “Is she available?” “What does she cost?” Although my disdain for the black hole of car upkeep hasn’t changed, it is surprisingly enjoyable to look for a new one.

Interestingly, after a couple car fairs and meetups with some kiwis, we went with a ’98 Civic – which is the car we sold before we left for NZ, just three years older and more expensive. But it only has 90k miles and the NZ dollar is higher. So whatevs. We plan to sell her in a year and make most of our money back because the value of cars increases in NZ when Americans drive on the opposite side of the road. FYI.

January White is named after my love for Minnesota winters and also this song: http://www.youtube.com/watch?v=X76Rx7vvkKk 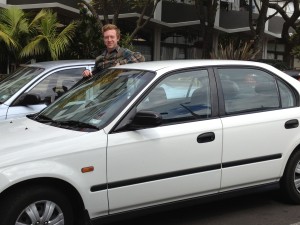 So last night, we took it out for a late drive to get used to the other side of the road. Less than 5 minutes in we got pulled over. I was sitting in a right turn lane, but the signal was not giving us the right arrow for a while. Cars were lining up behind us and flashing their lights, so I thought I was doing something wrong. So on the next left arrow, I pulled out and turned left from our lane (the right turn lane). Immediately a cop was on us. Then the guy who was flashing his lights at us pulls up quickly in front of the cop. I thought he was going to lay into me along with the cop. But instead, he says, “This guy did nothing wrong officer. The signal wasn’t giving us the green and so we had to do something.” And the cop said, “Ok, you can go. Cheers.” Nothing like pissing your pants on the first drive.

Tonight we drive out to our first site: https://www.wwoof.co.nz/profile.php?profile_id=1681